Types of Dental Handpieces: Why Are They Important in Dental Practice?

Ever since Ancient Greece, handpieces have been an everyday tool in the dental office. Although technology has changed drastically over the last 2250 years, the reason of use has not; they aim to make your life easier, and the patients happier. As I am sure you are aware, happy patients lead to happy wallets! And every ounce of efficiency that you can create, will be utilized.  Handpiece technology changes slower than you think; some company’s haven’t changed their designs in nearly 2 decades, while other companies change their design’s every year. Even throughout the changes, the simple basics of the operation of the handpieces stays the same.

I will break down the technological differences in the many types of dental handpieces below. I will go through the different types of handpieces and explain what they are used for, and why they are important. We will discuss: highspeed, lowspeed, endodontic, electric, and surgical handpieces. Discuss their differences, and what makes them used everyday throughout the practice.

Highspeed handpieces are the singular most important handpieces used by dentists in their practices. Whether you were in dental school, or took over another practice, I can guarantee that you have seen an air driven highspeed handpiece. They can be used for removal of tooth tissue efficiently with no pressure, heat, or vibration. It cuts the teeth easily. Their operational design is all of the same; they feature a spindle, a chuck, and bearings, which together make up a ‘turbine’. The spindles catch air pushed in through the air line, and creates the spin. The chuck is centered through the spindle, and allows the bur to be inserted and spun. The bearings attach the spindle and chuck to the head of the handpiece to allow everything to spin with little resistance and friction. Turbine are the main differences between different 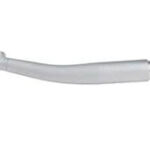 models of handpieces. The spindles feature different sizes, and different amounts of teeth; which can create differences in torque, speed, and sound. The chucks are mostly the same mechanically. They come in different lengths, and different friction grip designs. The bearings come in special sizes and designs based off of the design of the head. Some bearings are larger or smaller, but the results are the same; they allow the turbine to spin without problems for as long as possible. 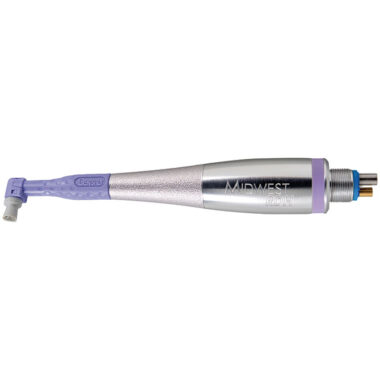 Low speed handpieces are most commonly used by RDH’s as they are the main handpiece used in polishing. They mostly all feature a vane motor, that allows a large portion of air to be retained within the vane to create greater torque, but less speed than highspeed handpieces. Most low speed handpieces spin at 20,000 to 5,000 RPM’s ( a ratio of 1:4). The 20,000 vane motors can integrate a geared reduction system that decreases the speed to 5,000, but increases the torque. This is great for removing caries as well as refining cavity preparations in endodontic procedures such as root canal treatments. Hygeniest’s love low speed handpieces as they grip the prophy cup well, and allow the handpiece to operate with a really easy to control speed. 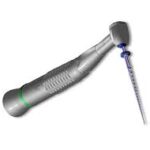 The creation of endodontic attachments have made root canals so much easier than before. The offer rotating or reciprocating based off of your preferred file system. Most endodontic handpieces rotate at a greatly reduced speed (upwards of 64:1) which allows a great amount of torque for driving endodontic files with great precision. They are usually driven by an electric motor attached to an electric, endodontic based control system. This motor generally spins quietly at around 20,000 rpm’s, but is greatly reduced by the attachments.

Electric handpieces are highspeed handpieces bigger brother. They spin at a little slower speed than most air driven highpseeds, which is around 100,000-200,000 RPM’s. What they lack in speed, they make up for with torque. If you have ever used a air driven highspeed, you have felt the speed slow down when applying pressure to a tooth. This doesn’t happen with electric handpieces; you can push as hard as possible, and that handpiece will keep spinning and cutting. They are driven with an electric motor that attaches to an electric control system. They are a bit more pricey than most other handpieces, and a bit heavier. I would highly suggest trying before buying; they are truly a love-hate. Electric handpieces are all gear driven. They feature three main driveshaft systems, starting large, and ending small. You start with the dog drive, which attaches to the inner spindle in the motor. The dog drive attaches to the intermediate drive shaft, which increases speed and attaches directly to the geared spindle. There is no air involved, but inherently, with spinning gears you have more friction and heat. 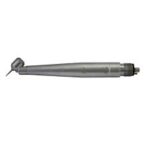 Electric air driven handpieces are exactly the same as regular electric handpieces, but feature a 45 degree angle for easier access to operation spots.

If you have any more questions, or any comments on the importance of dental handpieces, feel free to contact us. If you have a broken handpiece in need of repair, you can create an account, and send the handpiece in for free!